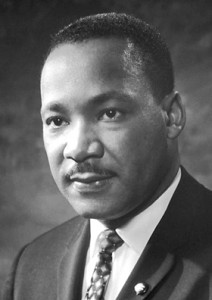 Martin Luther King Jr. (born Michael King Jr., January 15, 1929 – April 4, 1968) was an American Baptist minister and activist leader in the civil rights movement. He is best known for his role in the advancement of civil rights using the tactics of nonviolence and based on his Christian beliefs. (Wikipedia)

“And so even though we face the difficulties of today and tomorrow, I still have a dream. It is a dream deeply rooted in the American dream. I have a dream that one day this nation will rise up and live out the true meaning of its creed: “We hold these truths to be self-evident, that all men are created equal.”

PDF Copy of “I Have A Dream” Speech

“We’ve got some difficult days ahead. But it really doesn’t matter with me now because I’ve been to the mountaintop…I’ve looked over and I’ve seen the promised land. I may not get there with you. But I want you to know tonight that we as a people will get to the promised land.” – Martin Luther King, Jr.

I Have A Dream Speech

2. Write an essay about Martin Luther King, Jr’s Dream and Vision for America.

4. Create a Timeline of the life of Martin Luther King, Jr.

5. Research: What was America like in the time of Martin Luther King Jr.?